for the Community Activation Campaign

This section guides executive leaders with priority actions to accomplish within the community activation campaign’s first days and weeks. It describes the strategic planning, governance, and team-building steps necessary to lead a successful campaign.​ 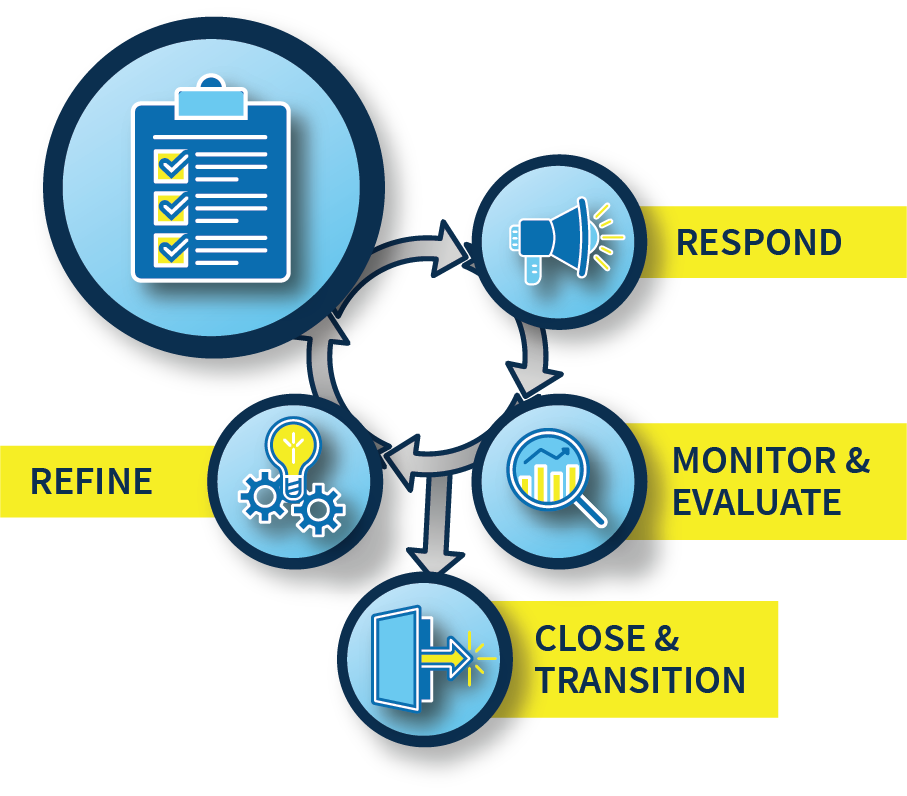 ESTABLISH THE MONITORING AND EVALUATION FRAMEWORK

A critical first step is to clarify the mission and define the scope of the campaign and points of coordination in the public health emergency (PHE) response. This drives important decisions regarding who should be involved in campaign decision-making and implementation, the data needed to drive an effective campaign, and the implementation approach. Executive leaders can confirm the mission is clear, with a specific purpose, and ensure the campaign scope aligns to the mission and does not get diluted in tangential actions. As one component of the overall PHE response, the executive leaders confer regularly with other PHE action leaders to report on the campaign progress and ensure the campaign approach is on track to achieve larger PHE response goals.

Key Activities for Clarifying the mission, defining scope and approach

A tightly constructed campaign scope enhances executive-level decisions and serves as a guidepost for the campaign strategy.

In conjunction with a well-defined mission, it is necessary to conduct the following activities as soon as feasible, ideally within the first week:

Understanding who may be affected by the PHE will be a major determinant of the scope of the campaign.

One effective method for this task is to examine the issue from a social-ecological context, as illustrated in Figure 3 (adapted from Dahlberg and Krug, 2002). See the tool Applying the Social Ecological Model (SEM) of Health Behavior to a Community Activation Campaign for information regarding applying the social-ecological model. 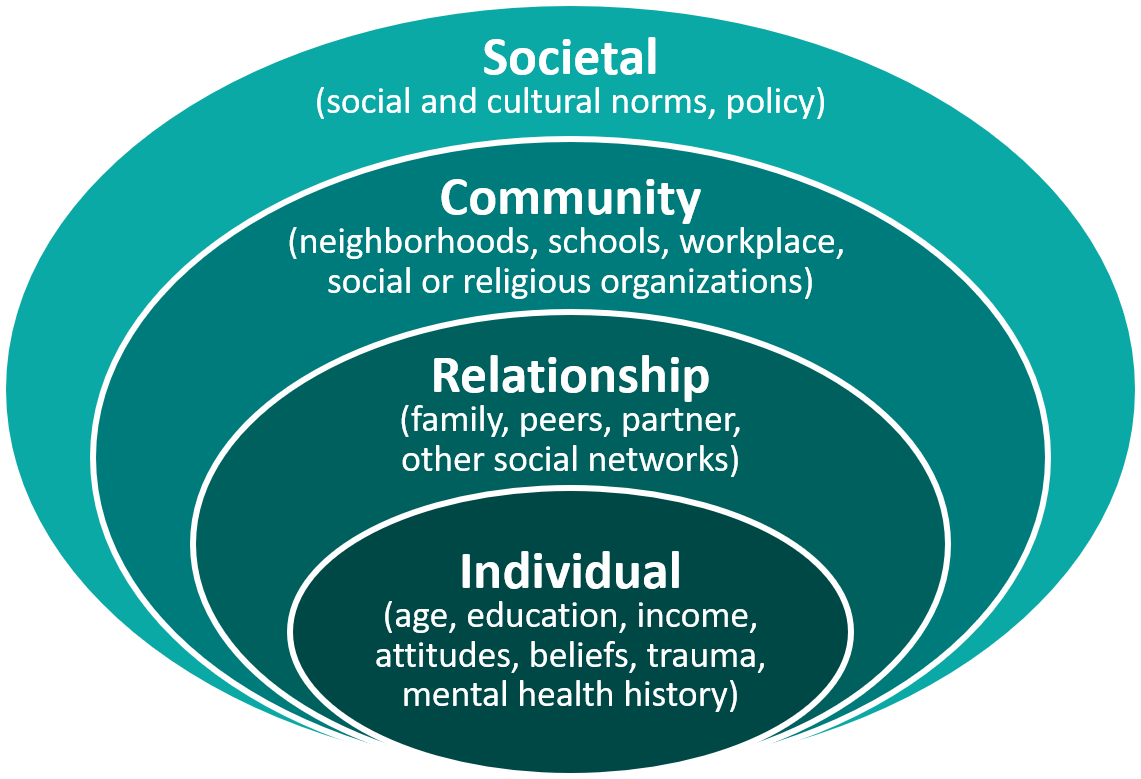 Determine at what level the campaign approach will be most effective in accomplishing the mission.

The scope can address the following questions:

Determine and plan to obtain the best available data.

A well-run oversight team accountable for the campaign and its contributions to the government’s public health emergency (PHE) response is key for campaign success. Campaign scope and mission will influence the decision to establish a separate group with highly specialized skills and expertise to maximize effective campaign response, or to bring those roles into the oversight team.

Additional information about the oversight team

In conjunction with selecting team members, establishing a governance system sets the tenets for effective and efficient public services and defines expectations during the campaign. The governance system provides the processes to guide the “oversight function that is aligned with the organization’s governance model and encompasses the [campaign] lifecycle” (Project Management Institute, 2013) 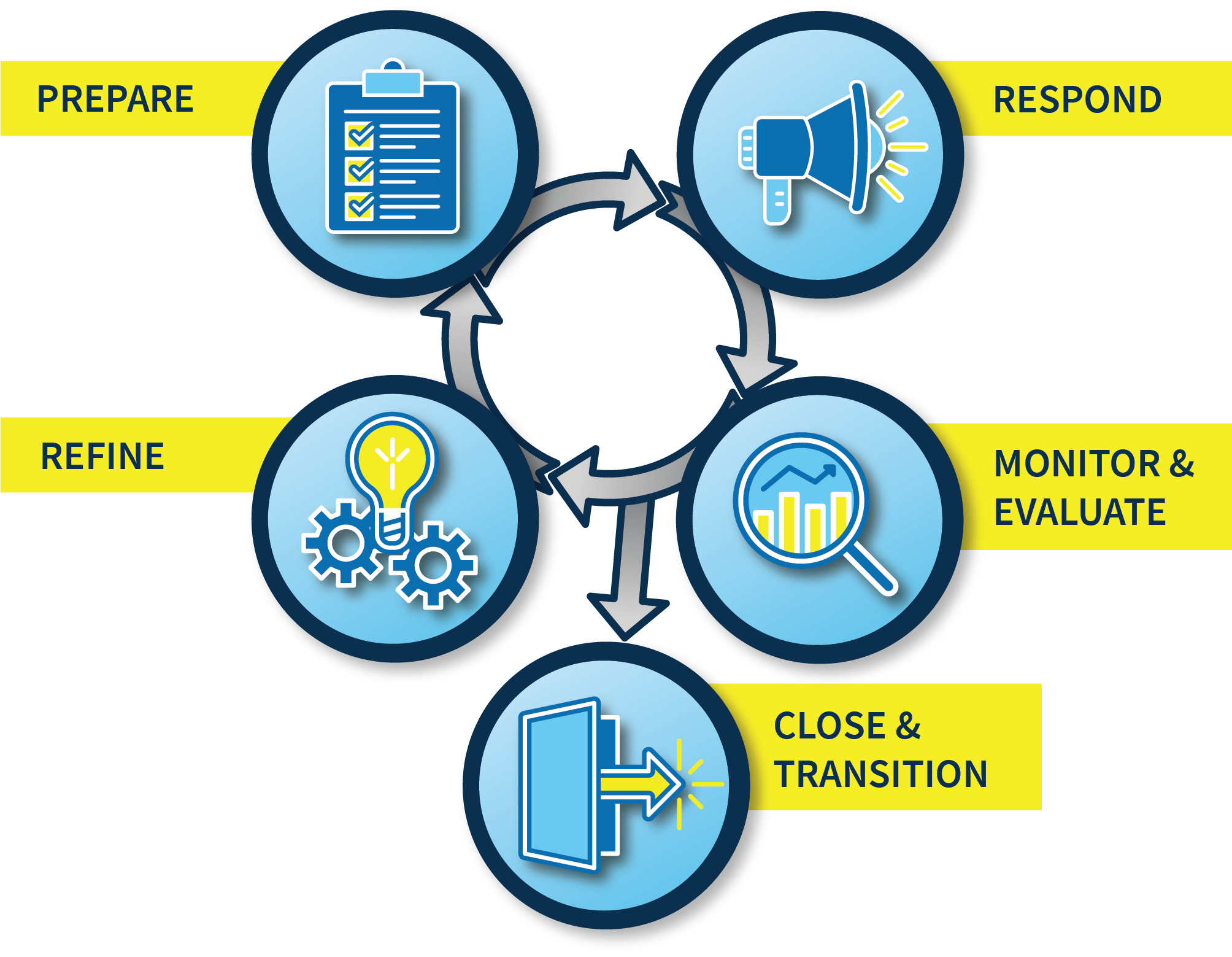 During this phase, the oversight team typically has limited information and is focused on quickly learning about the PHE and its effect on populations. Its central purpose initially is to equip the campaign for success. When indicated, the oversight team should:

During this phase, the oversight team and the CMT (if established) co-manage decision-making to adjust the campaign based on the evolving PHE and insights gleaned from monitoring and evaluating campaign operations. This includes the responsibility to:

A CMT is charged with implementing the overall campaign strategy, direct execution of the campaign operations, and day-to-day activities (see the resource Example Oversight Team and CMT Solutions with Roles and Responsibilities). Like a program management office model, the CMT model also establishes, improves, and communicates processes that support the mission and align the team governance structures. Often, many activities occur simultaneously, such as the development of the CMT structure and development of the campaign response and close-out strategy.

In preparing for the community activation campaign, the oversight team should assess how best to structure the CMT, and budget accordingly to support its work throughout the duration of the PHE.

The oversight team can evaluate several structural considerations when deciding the CMT’s scope of operations. These are listed below:

Key Activities and Considerations for establishing the Campaign Management Team

Identify which functions are required to execute the campaign response strategy

Develop an organizational structure that aligns with the CMT functions.

Identify the tools and systems needed to support CMT structure and functions.

Based on its mission and scope, the oversight team must define appropriate strategic outcomes and goals and establish metrics and data sources to assess the community activation campaign’s progress and its ultimate success.

Additional information about the outcomes and metrics

This data should be shared with all members of the campaign team to support the multiple actions necessary to accomplish strategic goals and subsequent action plans. Transparency and inclusion will allow the entire campaign team to adjust and appropriately adapt their work.

Foundational to effective campaign strategic planning, the oversight team must be grounded in a collective understanding of the opportunities, threats, potential blind spots, or key factors that may impact the campaign.

Additional information about the identifying factors that may impact campaign success

While other steps in the preparatory stage should be completed as quickly as possible, performing foundational scans and resilience plans can be initiated concurrently as the oversight team addresses other priority items. These initial scans are necessarily incomplete and require additional research and analyses for deeper insights to design, launch, and execute the campaign (RESPOND: Develop and Execute the Community Activation Campaign).

Several techniques, strategies, and frameworks may be helpful to inform strategic plan development and implementation of action plans:

An environmental scan allows for evaluation of existing resources, relationships, and capacity within and across federal agencies to develop and manage the campaign.

Conducting a SWOT analysis helps the campaign anticipate how it may be received by stakeholders and prepare for potential criticism. It also identifies the campaign federal sponsors’ strengths and opportunities that can be leveraged as part of the strategy.

An alternative to SWOT, the SOAR is more future-oriented than SWOT and addresses accountability through outlining results.

A road test is an iterative, rapid prototyping approach used to refine the design and implementation of a program strategy or intervention (U.S. Department of Health and Human Services, 2018).

A strategic plan is the source documentation to craft the campaign design and implementation plans. It drives how success is evaluated and, judgements on whether the campaign has reached the point or closure or transition, and states how activities will be executed to achieve the campaign’s mission. It should communicate the campaign’s intended impact, outcomes, and goals along with the tactics and timeline.

Additional information about the campaign response and close out strategy

Consider a strategic planning tool, such as a logic model (Centers for Disease Control and Prevention, 2018) to help illustrate the shared relationships among inputs from resources, activities, activity outputs, outcomes, and impact for the campaign. This will provide transparency to the thinking behind campaign design and show how specific campaign activities will lead to the desired results. See the tool Example Logic Model and Templates for an example logic model and a template.

Key Elements of the Response and Close-Out Strategic Plan

Establish the Monitoring and Evaluation Framework

A data-driven monitoring and evaluation framework is essential to determine whether the current activities are adequately calibrated to achieve the intended mission outcomes or whether adjustments are needed.

Additional information about the monitoring and evaluation framework

It is important to develop and finalize the framework and supporting infrastructure early in the campaign planning stage. Framework decisions also influence budget considerations, data availability, and tools design. Establishing and corroborating the framework early allows the campaign work to initiate quickly and will begin to inform leaders whether the overall strategy is sound.

The framework provides information so the campaign team can focus efforts on activities that successfully achieve the mission.

Campaign execution requires iterative adjustments, collaboration, and communication with other team members. The framework provides guidelines for transparent decision-making and methods to for implementing and communicating changes required to the strategic, tactical, or operational plans. See the tool Monitoring and Evaluation Framework Template for an example monitoring and evaluation framework template.

Key Decisions and Activities to Establish the Monitoring and Evaluation Framework

Key Decisions and Activities to Establish the Monitoring and Evaluation Framework

Applying the Social Ecological Model (SEM) of Health Behavior to a Community Activation Campaign
The SEM is an effective tool in public health interventions and community activation campaigns, helping to understand the often-cascading barriers and facilitators that influence individuals’ likelihood to change, and informing targeted, realistic, and effective campaign goals.
SEM Worksheet
A tool to track and identify the barriers, facilitators, and potential interventions to employ at each level of behavioral influence for a community activation campaign.
Campaign Management Team – Stand Up Worksheet
Logic model development guidance with a template and a completed example provided to illuminate the response strategy for the FCR campaign.
Example Logic Model and Template

Logic model development guidance with a template and a completed example provided to illuminate the response strategy for the FCR campaign.

Stakeholder Inventory Tools
A tool to track and identify the barriers, facilitators, and potential interventions to employ at each level of behavioral influence for a community activation campaign.
Monitoring and Evaluation Framework Template
A tool to assist the user in establishing the campaign’s monitoring and evaluation framework to determine if the campaign is adequately calibrated toward achieving the intended mission outcomes.
Example Outcomes and Metrics
An example of the strategic and operational indicators (metrics) used in the Federal COVID-19 Response (FCR) COVID-19 convalescent plasma (CCP) donor activation campaign.

Example Oversight Team and Campaign Management Team (CMT) Structure with Roles and Responsibilities
Examples of an oversight team (first table) and CMT (second table) organizational structure with roles and responsibilities. Roles and teams may be combined depending on the campaign goals, budget, and staff skills.
Understanding Science During a Public Health Emergency
Considerations for creating routine surveillance of the scientific and clinical research landscape. 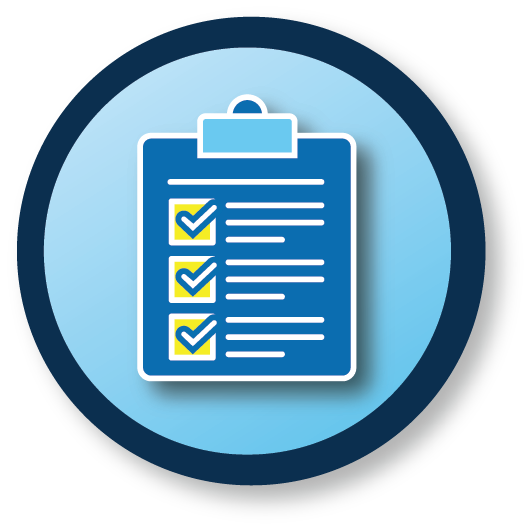 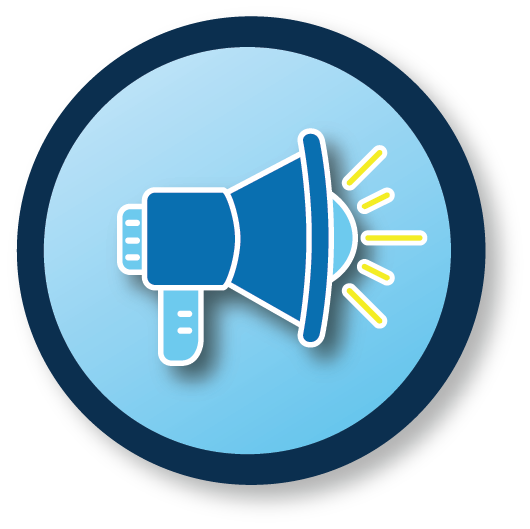 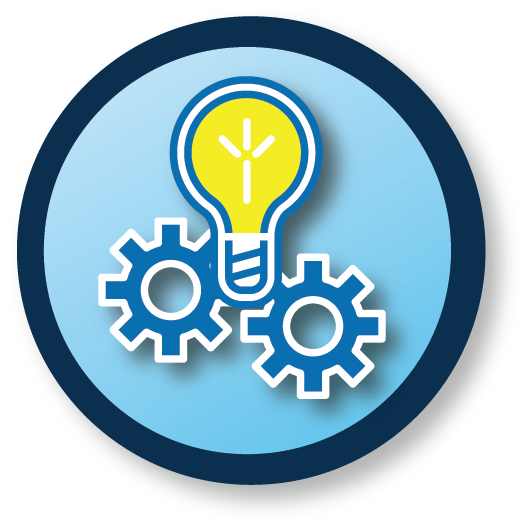